How Technology is Changing Thanksgiving

From communication to how we cook the holiday bird

Oh how technology has changed Thanksgiving—that uniquely American holiday that draws family and friends together for a fall feast. Perhaps you’ve already scanned the internet for recipes or downloaded All Recipes Dinner Spinner app. The smart fridge, communicating silently with Alexa, is ready with a shopping list and inventory of what’s on hand.

On the big day, there will likely be festive snaps posted to Instagram or Facebook, while the parade and football games are streamed nearby on a 4K big screen. There is even a cute online excuse generator, developed by the Las Vegas tourism board, to get out of going to the family gathering all together.

The time-honored main course has not escaped technology’s grasp. While traditionalists may want to stick with a golden, oven-roasted turkey on a candlelit table with all the trimmings, there are a couple of technology-aided cooking methods for a juicier bird. So let’s talk turkey!

Turkey in a bag
I’m new to sous vide, but essentially it involves putting your turkey in a ziplock and cooking it in warm water with a sous vide wand. The results are some of the most flavorful, juicy morsels you will ever wrap your mouth around. It’s a slow cooking method, so you can do all the prep the day before, then walk away and actually enjoy the holiday.

How sous vide works
An immersion wand, such as Joule by ChefSteps, contains a thermometer and a heating element which clamps onto the side of any pot. The wand heats the water to a precise temperature, keeping it consistent for a specific amount of cooking time. It also connects with an app on your phone, keeping you up to date remotely. All you have to do is bag the food, fill the pot with water, place the wand inside and select the correct recipe in the app on your phone.

There are a variety of bag options, from vacuum seal-a-meal types to re-usable silicone sous vide bags. You can even use heavy duty (freezer weight) ziplock bags, which can be washed and reused. Chefs recommend vacuum sealing, but here is a trick I learned using a simple water displacement method and Ziplocks.

1. Fill up the pot you will use with water.
2. Fill your bag with the ingredients up to 1 inch away from the opening and close the zipper almost all of the way.
3. Submerge the bag in the water, slowly, leaving just the open zipper area exposed. Pressure from the water will force the air out.
4. Zip the bag closed before raising it out of the water, and it is just as if you had used a vacuum sealer.

Ziplocs are perfectly safe for food cooking since all of their bags are BPA and dioxin-free.

For a Thanksgiving meal, you will want to quarter the turkey removing the ribs so the sharp bones don’t poke the bag. Place the legs in a large bag, and cook those first. Then add the breasts in a separate bag and cook on low overnight. You can read full step-by-step instructions on the ChefSteps website.

Finish off your bird under the broiler to brown the skin. The meat will remain juicy and tender. The only downside is you won’t have the traditional presentation of laying a whole, large cooked bird on the table. However, your guests likely won’t even give that a thought when they taste the incredibly juicy, flavorful turkey.

On the other extreme- searing heat
Holiday fact: More cooking fires occur on Thanksgiving Day than any other day of the year, according to State Farm Insurance. More than a third start in a garage or patio, where the activity of deep frying a turkey in a vat of oil causes more than $19 million in property damage annually, not to mention serious burn injuries.

If you want that deep-fried crispiness, a safer alternative is investing in an infrared oil-less turkey fryer. Infrared cooking technology prevents flare-ups, eliminates hot and cold spots, and delivers moist meat, crisp skin and flavorful results. Prepare a perfect Thanksgiving turkey (up to 16 pounds) in a device like the CharBroil Big Easy. There is no hot oil to burn or splatter, and no disposing of used oil. Plus, with no oil, food is healthier.

How an infrared fryer works
The 16,000 BTU burner produces heat that circulates in the chamber surrounding the turkey, so it cooks evenly. It’s not technically deep frying, but you can achieve the same crispy, flavorful skin while keeping the meat juicy.

The machine heats up in 60 seconds and is cool by the time dinner is over. The process is much faster than oven cooking (about 8-10 minutes per pound). The colder your outside temperature, the longer it will take to cook the turkey. For example, a 13-pound turkey in Florida takes less than two hours to cook, but in chilly Minnesota it may take 20 minutes more.

You cannot brine the meat ahead of time, but you can flavor a turkey and other large cuts of meat with injectable marinades—or use seasoned rubs on the outside. Stuffing cannot be cooked inside the bird, but there will be drippings to sprinkle on stuffing in an oven-bound dish.

A couple of things to consider if you are trying an infrared Thanksgiving turkey for the first time: The operation must be done outdoors, under an overhang, away from wind, drafts, rain and snow. Also, make sure to have a full tank of propane on hand.

No matter which cooking method you use for your bird, don’t forget to set a timer with Siri or Alexa.

Holiday fact: More than half of marriages in the U.S. start out as holiday season engagements. I have another theory. Many American divorces begin over sending your spouse on too many repeat trips to overcrowded grocery stores for forgotten holiday meal items. With Amazon, you can order that forgotten can of cranberry sauce or extra box of stuffing and have it delivered the same or next day in urban areas. Or order your whole holiday meal online through Amazon’s new acquisition, Whole Foods, or Costco’s partnership with Schwans, which provides a feast for eight with all the trimmings for $105.

As the intrepid traveler in the family, I’ve missed many holidays in person, but enjoy connecting with family on Skype or FaceTime. It’s an opportunity to be a part of a large gathering of my sisters and their families—what I am truly thankful for—and participate in their loud, boisterous fun. Later, just before the turkey coma kicks in, there’s time to grab my iPad and do a little Black Friday shopping.

Time to wrap up another technology enhanced Thanksgiving, shutting down the big screen, phones, tablets, LED fridge display and cooking gadgets for the night, and rest up for the season of warmth, fellowship and celebration that will carry us into the new year. 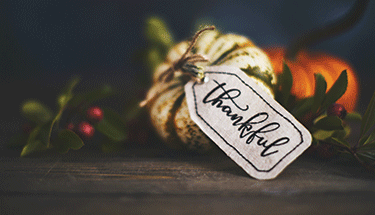 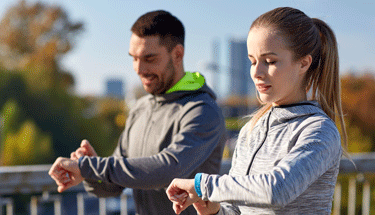 6 Good Reasons to Give Thanks