Voice Communications: Looking Back and Forward

As Otter Tail County celebrates 150 years, we look at how the communications landscape has changed

West Central Minnesota is celebrating the 150th anniversary of Otter Tail County, established in 1868. As we celebrate this milestone, we also look back on the early days of voice communication in the region. However, it would be nearly another decade before Minnesotans would adopt a new-fangled device called the telephone.

The earliest record in Minnesota was a two-telephone intercom circuit used by a Little Falls, Minn., druggist and his clerk in 1876, the same year Alexander Graham Bell patented the device. In those days, individual telephones were connected directly to each other with a wire. This was convenient for a business owner to connect to their home or an adjoining store, but not so handy to connect with anyone outside of a small geographical area.

Bell foresaw the need of a nationwide communications system, and immediately formed local telephone exchanges in major U.S. cities. Lines and cables spiderwebbed across the country, and later beamed our voices to space and back. As the industry grew, Royale Arvig, along with his wife Eleanor, purchased the Perham Telephone Exchange in west-central Minnesota in 1950.

Growing up in a family that was already in the telephone business, the Arvigs transformed the rudimentary system into something much more sophisticated that laid the groundwork for the Internet, digital TV and telecommunications services that stretch throughout Minnesota and beyond today.

“It helped that my father was a contractor, building rural electrical lines when he heard the Perham Telephone Exchange was for sale,” said Allen Arvig, Royale and Eleanor’s son, and now CEO and President of the Board of Directors for Arvig. “He was already familiar with the Rural Electrification Administration program that provided low interest loans for development of rural telephone systems.”

Royale got in on ground floor of the REA program through the U.S. Department of Agriculture. This enabled him to start changing the rural telecom from a hand-cranked system to an electronic one, and allowed him to begin expanding the service area to neighboring towns.

Other communications milestones in the region include:

In an interview back in 2016, Arvig management saw VoIP as the future for voice communication. VoIP has many advantages including cost savings, portability, flexibility and serving multi-functions. Since VoIP calls use a broadband internet connection, it is possible to make calls and conduct video conferencing from all over the world, wherever there’s a connection. But in certain circumstances, data transfer speed has not been able to keep up and allow for a stable video stream. 5G technology is about to change all that, and likely propel widespread VoIP adoption. 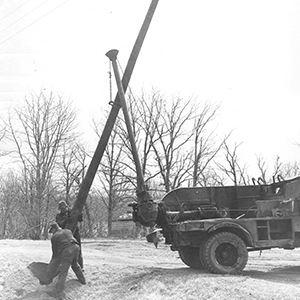 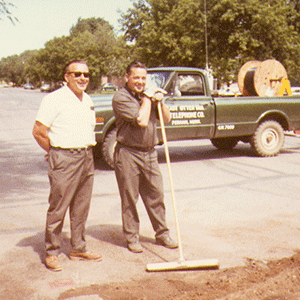 Each generation of wireless technology has resulted in increased speeds, reliability and signal clarity. As we approach the fifth generation (the “G” in your current 3G or 4G LTE wireless service), expect amazing advances. 5G is anticipated to provide data transmission speeds approximately 10 times faster than what is currently available. The transmission method is improving too—using a greater number of small network cells in lieu of large towers. Not only will 5G move data much faster, it will greatly improve reliability of VoIP applications such as video conferencing. Imagine making stunningly clear 4K or even 8K video calls with a stable two-way live video stream. It is just around the corner.

There are a few other technologies to watch in the future of voice communications.

Voice assistants (whether with a standalone device like an Amazon Echo or an integrated application like Siri) are changing how we communicate, asking for directions, what the weather is outside or settling an argument with an obscure statistic. According to Pew Research, nearly half of Americans use digital voice assistants, mostly on their smartphones. Fun fact: the technology of interacting with machines with our voice was inspired by the 1960s TV show Star Trek.

Our smart phones are connecting with vehicles, home appliances, and other items embedded with Internet of Things (IoT) electronics. The number of IoT devices is increasing rapidly and is expected to reach 30 billion connected devices by 2020.

Voice communications have evolved from a simple device to a handheld computer connecting with everything out there by tapping, typing or just talking out loud. Perhaps someday we won’t even need the device—just our voice to communicate with the physical world. 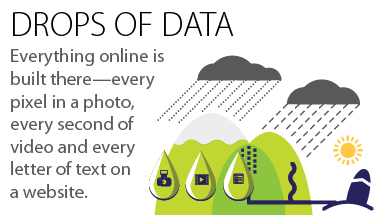 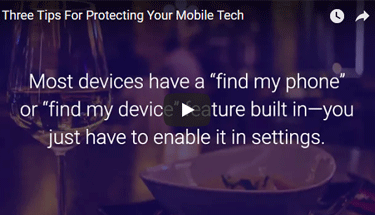 Tips for Protecting Your Mobile Tech